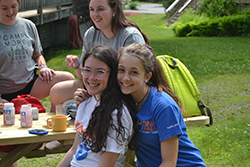 “When I went to the camp that is when my new life really started.”

In 1921, on the 100th anniversary of the birth of Clara Barton, humanitarian and founder of the American Red Cross, the Women’s National Missionary Association of the Universalist Church purchased the home in North Oxford, Massachusetts, in which Clara Barton was born. The property included a farmhouse, a barn, and 96 acres of land. The home was restored as a museum and in 1925 a “fresh air” camp for inner-city youths was opened. This humanitarian endeavor was designed to honor Clara Barton, herself a Universalist.

Concurrently, in 1921, insulin was discovered in Canada by Drs. Banting and Best. While the Universalist Women were building the “camp,” Dr. Elliot P. Joslin, also born in Oxford, MA, became one of the first physicians to use insulin to save the lives of children with diabetes. Children from across the country came to Boston to be treated by Dr. Joslin. Care for children with diabetes became his passion.

In 1932, Dr. Joslin and the Universalist women joined forces to create The Clara Barton Birthplace Camp, an “island of safety,” for children with diabetes. The women provided property and funding, while Dr. Joslin became the first medical director, serving eight girls during this first year. CBC was revered around the world as the first “hospital in the woods” and many smaller programs were modeled after it.

In 1948, the enormous success of the “camp experiment” at the Barton homestead inspired Dr. Joslin to ask the Universalist Women to open another camp for boys on property purchased by Dr. Joslin in Charlton, MA. The Universalist Women agreed to administer both programs while Dr. Joslin and his staff provided the medical coverage. The “Barton” camp for girls and “Joslin” camp for boys became among the largest and most recognized programs of their kind in the world.

Ultimately, the financial burden of operating the boys and girls camps became too difficult, and the women’s organization began divesting itself of the responsibility of the boys’ camp, relinquishing control to the Joslin Diabetes Center of Boston in 1976.

Wishing to focus the mission of the camp, the women formed a separate institution in 1985. The Clara Barton Camp for Girls with Diabetes, Inc. was formed to administer camp programs and the museum. As a 501 (c)(3) non profit organization, the camp was given a 99 year, rent-free lease on the property (the organization later purchased the property outright).

During the 1990s, coed year-round programs were developed for children and their families and friends. These programs have grown to include more than a dozen programs annually, involving 2,000 children and their families. Barton also expanded its partnerships with medical institutions, such as UMass Memorial Health Care in Worcester and continued its relationship with the Joslin Diabetes Center in Boston. 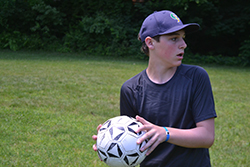 In response to the growing need for diabetes education, Barton has continued to expand its programs throughout MA, CT, and NY as well as its facilities to accommodate the requests of the families served. It now operates day camps for boys and girls in Worcester,  Long Island, NY, and Greenwich, CT. The Barton Center acquired The Rainbow Club, a one-week day camp program for children with diabetes and their parents in Greenwich, CT. The Barton Center also offers a one-week overnight camp program in South Hero, VT.

With the help of generous donations and wonderful volunteers many facility upgrades have been made. Nine new cabins, eight of which are winterized allowing for year-round use, have been built. The dining hall has been enlarged making room for an indoor fireplace and the addition of a summer camp program office. The completion of a $3.5 million dollar capital campaign allowed the building of the George H. and Marie P. Chabot Health and Education Center, further enhancing existing facilities, and enabling the center to expand its educational programming.

The Clara Barton Camp for Girls with Diabetes, Inc. has flourished as an independent organization and has expanded programs for youth on a year-round basis. New Trustees, Advisors, and volunteers have been recruited while important connections throughout Central Massachusetts, Boston, and New York have been developed. In 1992, the organization was renamed the Clara Barton Diabetes Center. In 1998, to better reflect the mission and the nature of expanded year-round programming for boys, girls, and their families the organization changed its name once again, to The Barton Center for Diabetes Education, Inc.  In early 2008, in a move that brought the girls’ and boys’ camps back together after 31 years apart, The Barton Center entered into an agreement with Joslin Diabetes Center to assume the management and operation of Camp Joslin.  While Joslin retained ownership of Camp Joslin, The Barton Center was thrilled to combine Camp Joslin’s excellent services to its already thriving programs, thereby expanding the opportunities for girls and boys alike.  Then on August 31, 2010, The Barton Center and Joslin Diabetes Center announced that The Barton Center had purchased Camp Joslin.  The majority of the funds for the purchase came through an unrestricted grant in the amount of $1.5 million from The Leona M. and Harry B. Helmsley Charitable Trust. The two camps will remain at their current locations, which are three miles apart.

The North Oxford site was dedicated in 1932 to educating children with diabetes and has been in continuous operation ever since. The Barton Center for Diabetes Education, Inc. has grown as an independent organization serving 8 girls in 1932 to serving 2,000 children and their families today.

Our programs focus on fun and support; the goal is to educate children and their families on how to manage the daily rigors of diabetes, so they can live fuller and healthier lives.